Heading south from US 129 Moonshiner 28 has some good twisties along the Little Tennessee River but there are several places to be extremely careful. Just past the dumpsters on the right there is a rather hard left that has caused several serious accidents in the past. The first seven miles to the Fontana Dam Bridge has some tight corners and great sweepers. The pavement is good for the most part. A couple of corners in this section are decreasing radius turns (the corner tightens). In one there is a rock cliff that has claimed at least one life. At mile 2.7 is Twenty Mile Creek Trail pull off. Watch out for the concrete bridge and a sharp right where a number of accidents have occurred. SLOW DOWN TO 10 MPH FOR THE CORNER AND BRIDGE. Just a quarter mile farther is 10-Mile-an-Hour Corner also known as the Widow Maker. This sharp decreasing radius corner is particularly nasty when heading west bound and has claimed a number of lives. There are a number of warning signs .... Rule of thumb ….. see a 10 mph corner sign – believe it.

The road opens up a little from here to Fontana Bridge, five miles distant. Crossing the bridge you’ll come to another corner that should be approached with caution, especially when heading west. It is on a downhill and it is easy to come into it with too much speed and to over correct by over braking. It is well marked with warnings and hash marks on the side of the roadway.

Another mile and you will come to the first entrance to Fontana Village. Originally used as housing for the construction of Fontana Dam, today it is the destination of many tourists looking for great roads in western North Carolina. Accommodations include cabins, motel and a campground. The Pit Stop offers quick sandwiches, souvenirs and fuel.

Leaving Fontana Village on Moonshiner 28 you will be in for a thrill as the road quickly descends nearly 300 feet in less than a mile. Watch your speed on these tight downhill twisties.

At the intersection NC 28 turns off to the right. Stay straight and in a mile you’ll come to Fontana Dam with magnificent views of Fontana Lake and the Great Smoky Mountains National Park. Ride across the dam for the upper viewing parking area and cross back over to the souvenir shop and raised viewing area. The Appalachian Trail crosses the dam here as it winds its way from Georgia to Maine.

Back on Moonshiner 28 heading east are a number of sweeping corners with glimpses of Fontana Lake. Another few miles and you’ll see Rainbow Falls on your right. Most of the time the falls are just a trickle, but in the winter it can form an awesome ice fall.

Just up the road is the Tuskeegee Motel. This motel has recently sold and new facilities will soon be under construction.

From Fontana to Johnson Gap, Moonshiner 28 is a fun ride. Nothing too serious in the way of curves, but some good fast sweepers with a 55 mile per hour speed limit.

At Johnson Gap you’ll come to the intersection of NC 143. A right turn here will take you into Robbinsville, the only town of any consequence in Graham County.

A good place to eat is the brightly colored Stecoah Diner. We’ve had good reports about the food here and their homemade burgers are great. Turn here to get to our favorite motorcycle accommodations, the Ironhorse Motorcycle Resort. This scenic resort on peaceful Stecoah Creek, offers a comfortable place for riders to stay with a western motif taking you back in time. Accommodations include tent camping, bunkhouse, cabin rooms, full house rentals, and even quarters in covered wagons. CLICK HERE

The Wolfcreek Motorsport Rentals is the place to try unique vehicles (motorcycles, three-wheelers, Jeeps) that you had seen and heard about, but can't afford to own.

The road widens into a four lane. This is a favorite area for the North Carolina Highway Patrol to work their radar. Don’t say you haven’t been warned. Don't twist your wrist too much on this ridiculous 55 mph 4-lane.

There is a good scenic stop for a view of the Smokies. You’ll also pass the turn-off for Tsali, a Forest Service area with boat ramp, camping, and horse/mountain bike trails. The camping area is usually crowded on week-ends.

Crossing the Nantahala River at Almond you can see the railroad bridge off to the north. At times Fontana Lake is drained low.

Moonshiner 28 joins with the four-lane US 74/19 northward for three miles before splitting at Lauada. We recommend fueling at Parton’s BP if you are low. The next gas southbound is 19 miles away.

Some of the best twisties on the Moonshiner come in the next seven miles. But you must ride with caution because of intersecting driveways. From US 74/19 to the Macon County Line you will encounter a little bit of everything in the way of curves and they will come at you fast. Speed limit is 55 mph.

At the county line the road somewhat straightens, but you’ll still find some good turns. The closer you get to Franklin the more traffic you will encounter.

Highway 28 has been rerouted and now bypasses downtown Franklin. But if you take a right at the light on Main Street you’ll pass through the business district. Franklin’s main street offers a number of well maintained small parks, specialty restaurants, shops selling crafts and gemstones.

Main Street is one way west, so to get back on 28 you will have to jog over one block to the south and head east on Palmer Street. You will pass a 30-foot tall ancient Indian mound on your left. There are a wide range of accommodations in Franklin including locally owned mom and pop motels, national chain motels and various vacation rentals.

Less than a mile hang a right and 28 will eventually join US 64 and you are on your way to Highlands. The first six miles are boring, small industrial sprawl with typical local traffic. Watch out for cars and trucks turning into or out of businesses and side roads.

After passing Buck Creek Road on the left hang on. The Moonshiner climbs sharply with Cullasaja Gorge off to the right and rock cliffs to the left. The road narrows with a metal guardrail the only protection from a 250 foot plunge into the gorge. This roadway was cut into solid granite by workers dangling from ropes and drilling 10 feet into the rock to place dynamite charges. The road was graveled and opened in 1931. In those years it must have been one hairy ride. It took several years before Highway 28 was paved. The turns are so narrow that 18-wheelers cannot negotiate the corners today.

There is a small pull-off on the right where you can stop to view Cullasaja Falls which drops more than 250 feet in a series of cascades. The small parking area is only large enough for two cars but a motorcycle can squeeze in if you are careful. Pavement along here has some heaves and cracks to watch-out for.

28 follows the Cullasaja River for the next eight miles into Highlands. One of the most popular stops is Dry Falls where after a short hike you can walk underneath the 75 foot falls.

Don’t care to get off the bike? Go another mile and actually ride under Bridal Veil Falls. Moonshiner 28 used to go right under the 120 foot falls, but a bypass was made and today there is a pull-off from the main road.

Entering the town of Highlands you see Lake Sequoyah off to the right. A major event in the history of moonshining took place in Highlands in 1885. A Federal Revenuer arrested two bootleggers from Georgia and brought them to Highlands. Moccasin, Georgia, the home town of the moonshiners became enraged after hearing of the arrest and actually declared war on Highlands.

There was no jail in the town, so the prisoners were being held in the Smith Hotel, today still in business as the Highlands Inn. An army of 18 volunteers from Moccasin arrived in Highlands and set-up headquarters directly across the street from the Highlands House. The Mayor declared martial law and appointed deputies from the local population. Shots rang out for the next three days between the Mayor’s troops and the moonshine army. Finally one of the moonshiners was killed and the rest of the conscripts retreated into Georgia.

The moonshiners, as a result of the incident, promised that no one would be allowed to safely pass on the road from Highlands to Walhalla, today’s Moonshiner 28. This was the only major path at the time and a vital supply line for the town. Supposedly the threat worried some people for a while. One brave soul finally hitched up his team and drove it to Walhalla without incident and the so called blockade was over.

Highlands offers a number of eclectic high-end shops and unique places to eat. The Edwards Inn and Highlands Inn, two hotels in the downtown district, date back to the 1880s and the Moccasin War. The Highlands Inn features a ghost in room 34 if you are into that kind of stuff.

Heading south out of Highlands the road once again is designated only as NC 28. Soon you cross the Eastern Continental Divide which demarcates the two watersheds of the east coast: the Gulf of Mexico and the Atlantic.

It is not too long before you encounter some more great twisties on what is also known as Walhalla Road. After one turn the giant rock of Satulah Mountain towers into the sky ahead of you. Good pavement and good scenery all the way to the Georgia border 6 miles distant. In those six miles the elevation drops 1500 feet.

Once into Georgia the turns get even tighter but the pavement has many tar snakes – no big deal, but they do bother some riders. Another 6 miles of good riding and you reach the intersection of Warwoman Road. The first three miles of Warwoman are worth an out and back for some good twisties.

Two more miles and you cross the Chattooga River into South Carolina. The Chattooga is designated a Wild and Scenic River and is a popular rafting and kayak destination. The road from the state line into Walhalla is a mix …. some really tight decreasing radius downhill turns, some good sweepers and some blah coming into town two-lane. Pavement is good with a few rough spots to watch-out for.

A discovery in 1963 found an abandoned tunnel here being used by moonshiners. The set-up was quite intricate with a small entrance partially covered with rock to keep away the nosey, a stream midway in the tunnel that required a boat to cross, and the still at the far end with just a small opening to allow the smoke from “cooking” to escape.

The town of Walhalla appears to be going through tough times. Many commercial buildings are deserted and the downtown needs some enlivening.

So that is the quick tour of Moonshiner 28 from the Tail of the Dragon to Walhalla, South Carolina. 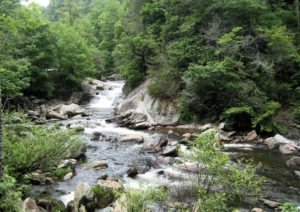 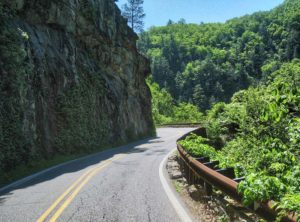 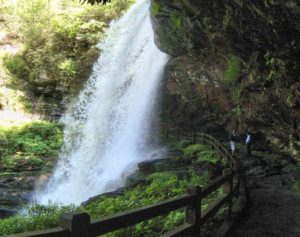 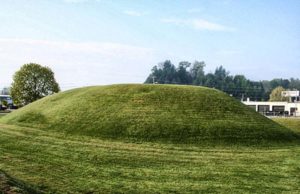 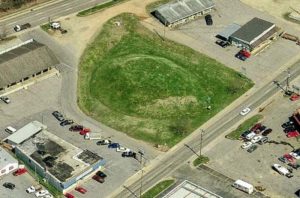